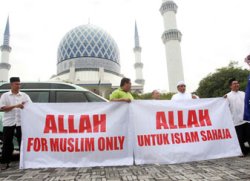 The phrase Allahu Akbar (الله أكبر) is a common phrase used by Muslims in various situations, including the Salah (obligatory five prayers a day) and has even been used in the past by some non-Muslims as a show of support or in reference to the common Abrahamic god. It is widely conflated with the Muslims who shout it whilst engaged in Jihad. The literal translation of this phrase from Arabic means "God is greater!" The phrase has a unique history in scripture and its early use and conception.

Difference between Allah and Ilah

The Shahadah is one of the five pillars of Islam, and is recited by all Muslims:

The phrase is commonly mistakenly translated to "There is no god but God." However, in Islam the name Allah as a proper noun, as opposed to a common noun descriptive applicable to any deity. Allah is not the generic word for 'god' in Arabic, but the name of Islam's deity.

[1.1a] The belief that Allah is One is the fundamental basis of Islam, and when Divine Unity is expressed, the name "Allah" must be used. It is not permissible to say, "There is no god but the Almighty" or use any other names except Allah for the shahada. Nothing at all resembles Him or is equal to Him.

Is Allah the same as God?

In another case in Malaysia, the government banned Christians from using the word 'Allah' in reference to the Christian God,[1] and in one incident, reported by CNN in October of 2009, twenty-thousand Bibles were seized by authorities because they referred to the Christian God as 'Allah,'[2] completely disregarding the fact that due to the evolution of the Malay language, which has borrowed extensively from Arabic, Sanskrit and Portuguese, there is no indigenous Malay word for 'God' other than the pagan 'Allah'. It was reported that in 2010 a court ruling overturned the ban, a decision which the government has appealed against, insisting that it should remain in place.[3] This decision to allow Christians to use the word 'Allah' has led to violent protests and bombings of several Malaysian churches.[3] One of the protesters summed up the thoughts of many Malaysian Muslims, stating, “Allah is only for us, The Christians can use any word, we don’t care, but please don’t use the word Allah.”[3]

Muslims differ on whether or not Allah is a generic term, but the Quran is rather unambiguous on the matter, as will be show in the remainder of the article.

Kebir and akbar are not interchangeable words. For evidence, we only need look to the Qur'an. Both kebir (great) and akbar (greater) are used in the following verse:

They ask thee concerning wine and gambling. Say: "In them is great sin, and some profit, for men; but the sin is greater than the profit." They ask thee how much they are to spend; Say: "What is beyond your needs." Thus doth Allah Make clear to you His Signs: In order that ye may consider- [4]

Lane's Lexicon and Other Sources

Lane's Lexicon, the most revered and scholarly dictionary of the Arabic language, confirms the majority view is that "Allahu Akbar" refers to Allah being "greater". Unlike in its early years, so does Wikipedia, stating the phrase literally means "God is greater". But is usually translated "God is [the] Greatest," or "God is Great".[5] Similarly, Pierre Tristam, the Lebanese-American About.com Guide states, although most often translated as "god is great," Allahu Akbar is Arabic for "god is greater," or "god is greatest."[6] Many news sources and other web resources are now also beginning to use the more correct translation.

Used in Context by Muhammad

"Allahu Akbar" has been used historically by Muslims as a battle cry during war.[7] This precedent was set by Prophet Muhammad when he attacked the Jews of Khaibar.

In the following sahih hadith, you can see the phrase has been translated correctly into English by Muslims.

Narrated Anas: The Prophet set out for Khaibar and reached it at night. He used not to attack if he reached the people at night, till the day broke. So, when the day dawned, the Jews came out with their bags and spades. When they saw the Prophet; they said, "Muhammad and his army!" The Prophet said, Allahu--Akbar! (Allah is Greater) and Khaibar is ruined, for whenever we approach a nation (i.e. enemy to fight) then it will be a miserable morning for those who have been warned."

One must also note that if the word "Allah" meant "God", why then would he be telling the Jews of Khaibar (who supposedly worship the same god) that Islam's Allah is greater?

Here are a few more quotes which use the phrase "Allahu Akbar".

Yahya related to me from Malik from Abu Ubayd, the mawla of Sulayman ibn Abd al-Malik, from Ata ibn Yazid al-Laythi that Abu Hurayra said, "Whoever says 'Glory be to Allah' (Subhana'llah) thirty-three times and 'Allah is Greater' (Allahu akbar) thirty-three times and 'Praise be to Allah' (al-hamdu lillah) thirty-three times, and seals the hundred with 'There is no god but Allah, alone without any partner. The Kingdom and praise belong to Him and He has power over everything' (La ilaha illa'llah, wahdahu la sharika lah, lahu'l mulku wa lahu'l hamd, wa huwa ala kulli shay'in qadir) after every prayer will have his wrong actions forgiven him even if they are abundant as the foam on the sea."

Al-Muwatta 15:22
Yahya related to me from Malik from Hisham ibn Urwa that his father never brought food or drink, nor even a remedy which he ate or drank but that he said, "Praise be to Allah who has guided us and fed us and given us to drink and blessed us. Allah is greater. O Allah! We have found Your blessing with every evil, give us every good in the morning and evening. We ask You for its completion and its gratitude. There is no good except Your good. There is no god other than You, the God of the salihun and the Lord of the Worlds. Praise be to Allah. There is no god but Allah. What Allah wills. There is no power except in Allah. O Allah! Bless us in what You have provided us with and protect us from the punishment of the Fire!"