From WikiIslam, the online resource on Islam
(Redirected from Dhimmitude)
Jump to navigation Jump to search 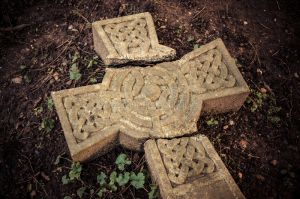 Part of the regulations placed on Christians and Jews under the Dhimma system is that they are not allowed to repair or build anew their churches and synagogues - damaged architecture must remain so.

The Merriam-Webster Online Dictionary has defined it as "a person living in a region overrun by Muslim conquest who was accorded a protected status and allowed to retain his original faith".[1]. The dhimma is the "pact of protection" entailing the social rights, responsibilities, and restrictions entailed by the status of being a dhimmi. According to orthodox Islamic law (Shari'ah), those who are qualified for Dhimmi status within the Muslim society are the free (i.e non-slave) Christians, Jews, and Zoroastrians. Adherents of other religions, as well as those without religion, are asked to convert to Islam; if they refuse, they are to be forced to convert (or face execution, en masse). [2] However, historically, adherents of Hinduism, Buddhism, Sikhism, and other religions, have lived as Dhimmis within Muslim states.

The dhimma as a whole is conceived of in the Islamic tradition as "protection" of the non-Muslim from the endless state of jihad. As such the Muslim jurists and scholars see it as a form of mercy; in reality, though, the legal discriminations and legal limitations on religious minorities constitute a form of religious apartheid and second class citizenship. The limitations extend to but are not limited to freedom of speech, freedom of religion, freedom to marry the partner of one's choosing, freedom of movement, taxation without representation, the right to own and bear arms, and freedom from slavery and unpaid servitude. The implementation of these rules have varied over time, but Islamic scholars to this day continue to advocate for the implementation of the dhimma, and Islamist regimes such as the Islamic State, the Islamic Republic of Iran and the Islamic Emirate of Afghanistan continue to attempt to implement elements of the dhimma.

According to the Qur'an and hadith, the centerpiece of the dhimma contract is that the Jizyah tax must be paid by the dhimmis as a sign of submission. Legally, the payment of this tax grants the dhimmis some legal protection in return. As established by the Pact of Omar, dhimmis usually are not allowed to carry arms to protect themselves, serve in the army or government, display symbols of their faith, build or repair places of worship, they must wear distinctive clothing which includes the Zunar (a kind of belt) wherever they go (which parallels the Nazi practice of making Jews wear yellow badges), etc. Many of these laws are still enforced today in Muslim countries, like Egypt and Saudi Arabia, which enforce various aspects of Shari'ah. If the conquered do not wish to pay or convert, their fate may very well be slavery (under which, rape is permitted) or death. The pact also declares that dhimmis are forbidden to ride horses and camels, and may only ride donkeys, and only on packsaddles.

The Pact Of Umar

Main Article: The Pact of Umar

The Pact of Umar is a historical document preserved by Islamic historians such as Al-Tabari which lays out the rights and responsibilities of the non-Muslims living under the Islamic rule of the 2nd Rashidun Caliph Umar. It is a document which was utilized frequently by later jurists dealing with the subject of the dhimma [3].

Dhimma (or dhimmitude) ... is one of the results of the jihad or holy war. ; Connected with the notion of jihad is the distinction between dar al-harb (territory or "house" of war) and dar al-islam (house of Islam). The latter includes all territories subject to Muslim authority. It is in a state of perpetual war with the dar al-harb. The inhabitants of the dar al-harb are harbis, who are not answerable to the Islamic authority and whose persons and goods are mubah, that is, at the mercy of Believers. However, when Muslims are in a subordinate state, they can negotiate a truce with the harbis lasting no more than ten years, which they are obliged to revoke unilaterally as soon as they regain the upper hand, following the example of the Prophet after Hudaibiyya The dhimmi, we might say, is a second-class citizen. If they [the ruling Muslims] tolerate him it is a calculated step, whether because they cherish the hope of converting him or for material reasons, because they force him to shoulder virtually the entire burden of taxation. They provide a place for him in the state, but not without reminding him continually of his inferior status. They prevent him from occupying high positions in society, and if by merit or intrigue he manages to climb to such places everything conspires to relegate him once again to obscurity. If the dhimmi acquires an independent legal status or privileges associated with his personal position, if he is permitted even his own courts, it is only because he cannot share with the Faithful the advantages of their own justice, which is essentially religious. In no case is the dhimmi the equal of a Muslim. He is condemned to social inequality and forms part of a despised caste: inequality so far as his personal rights are concerned, inequality in taxation, and inequality before the law, since his testimony is neither accepted by the Muslim courts of justice nor even, for the same minor crime, is the punishment the same ... No social relationship, no fellowship is possible between Muslims and dhimmis.[4]

Scriptural Basis in the Qur'an and Sunnah

The fuquha call on many sources in the Islamic canon of the Quran and Sunnah when dealing with the subject of the dhimma.

The main operative theory of the dhimma derives from the concept of jihad. Until the entire world is conquered for the religion of Allah, the blood and treasury of every infidel on earth is lawful to be taken by the Muslim ummah. The dhimma is a pact of "protection" between the Muslim state and the non-Muslim. In return for fay, jizya and kharaaj the Muslim state ceases the state of jihad upon the dhimmi and allows him to keep his family, safety and some of his property. The pact comes with many strings attached though: the stipulations of the dhimma entail many restrictions upon the life and freedoms of the dhimmi which are designed to protect and promote the Islamic religion.

Rights and Role of the Dhimmi Clergy